Jordan Levin features Frances Trombly’s All This Time in CultureViewMia

Like Deep Water – Frances Trombly’s All This Time at Emerson Dorsch.

Frances Trombly’s art is full of stories, if you know how to look for them. Silent stories of women’s work, of the steady, committed act of weaving, creating something tangible from the deceptive fragility of thread and constancy. Stories of other women’s voices from art, from myth, from millennia of labor that keeps the world going.

What is obvious, when you walk into Emerson Dorsch Gallery, where Trombly’s first Miami solo show since 2008, All This Time, is up until January 16, is color. For years her woven/sculptural/conceptual works have been in shades of cream and white. This time she incorporated natural dyes as old as civilization: indigo (blue), weld (yellow), and madder (red.) The fabrics she weaves become part of sculptures that summon and question the form and idea of art, i.e. the canvas stretched across frames for paintings. She made her fabric in painstaking hours of work at the loom, revealed in irregularities and hanging threads, which she draps around, in front, and behind hard squared picture frames or loom-like scaffolding. The color was austere, their undulating folds voluptuous; texture and the implication of labor softly bursting from their assigned quadrant. 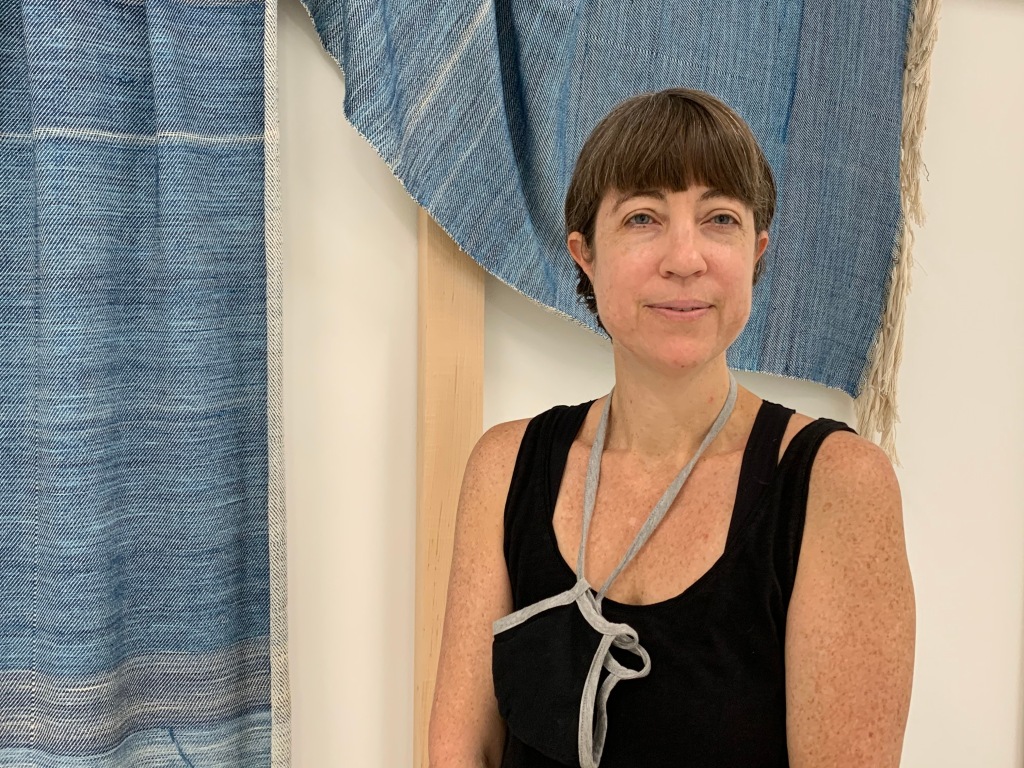 All those elements remain, but extended into color and art history. Three of the largest and most striking evoke paintings by Artemisia Gentileschi, the Baroque painter who’s become a feminist art icon. At the show’s opening on Nov. 19th, Trombly talked about how she was drawn to the gorgeously draped fabric that appears in paintings by Gentileschi and other Baroque and Renaissance artists – their rich color, the technique required to capture luxurious, expensive fabric also made with countless hours of humble, unacknowledged work. “Artemisia spoke to me,” Trombly said. “The unfolding and layering of history and time – women’s careers and my career and past careers.” 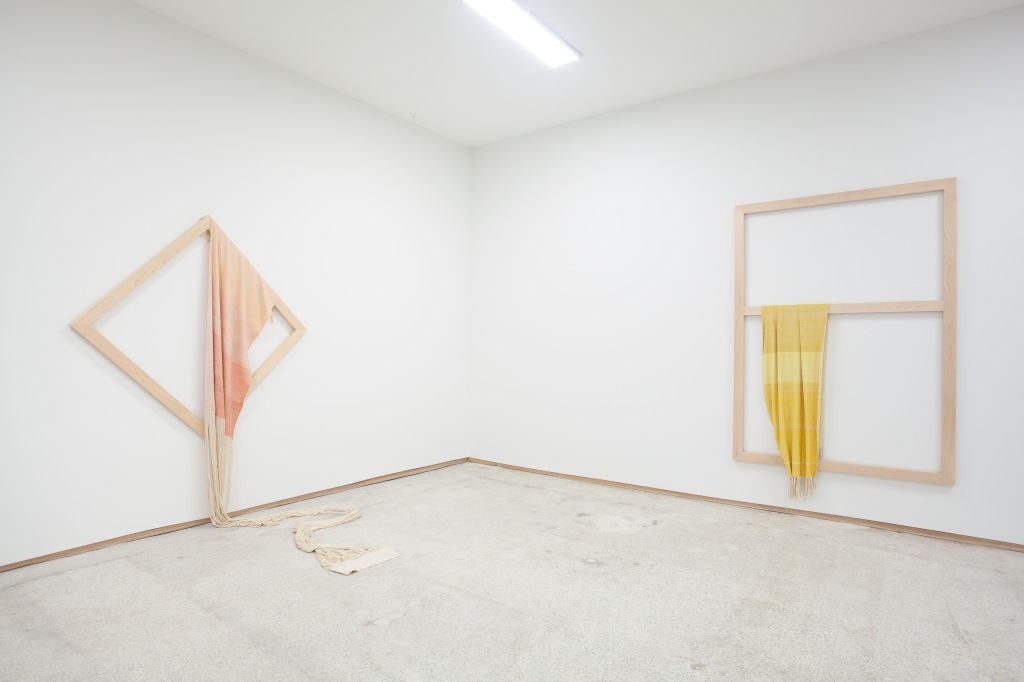 Weaving (Madder, All This Time), 2020 and Weaving (Artemisia, Weld), 2020 at Emerson Dorsch. Photo by Francesco Casale.

In Weaving (The Fates), blue fabric is draped over and between a standing, tri-part structure, its deep folds surging into the angular spaces, suggesting new possibilities. In making it, Trombly thought of the Three Fates of Greek mythology – one spins the thread of life, one measures its span, one cuts it off. But it also evokes water for her, the rounding surge of the ocean.

In Weaving (Madder, All This Time), another of my favorites, the pale red fabric cascades like a waterfall, past the sharp angles of its square frame, becoming a trail of white threads undulating out onto the floor, as if the piece was deconstructing itself and reaching out into the world.

All Trombly’s work combines seemingly opposite qualities with grace: simplicity cloaking layers of ideas, a union of austerity and sensuality, concept and physicality. And now, color too. All This Time is a quietly but deeply rewarding show.