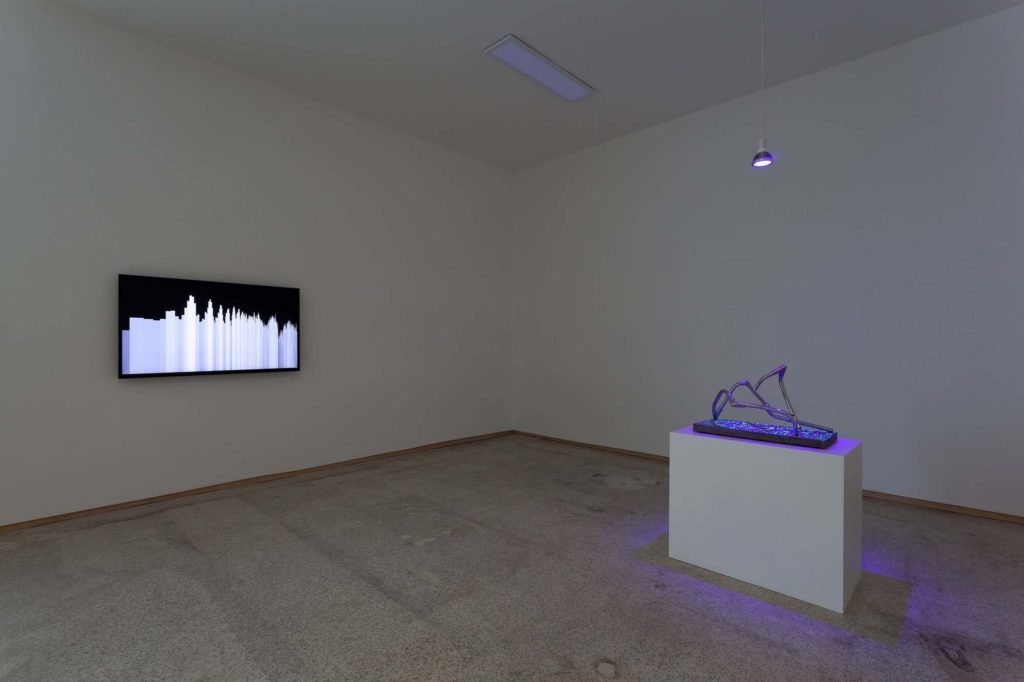 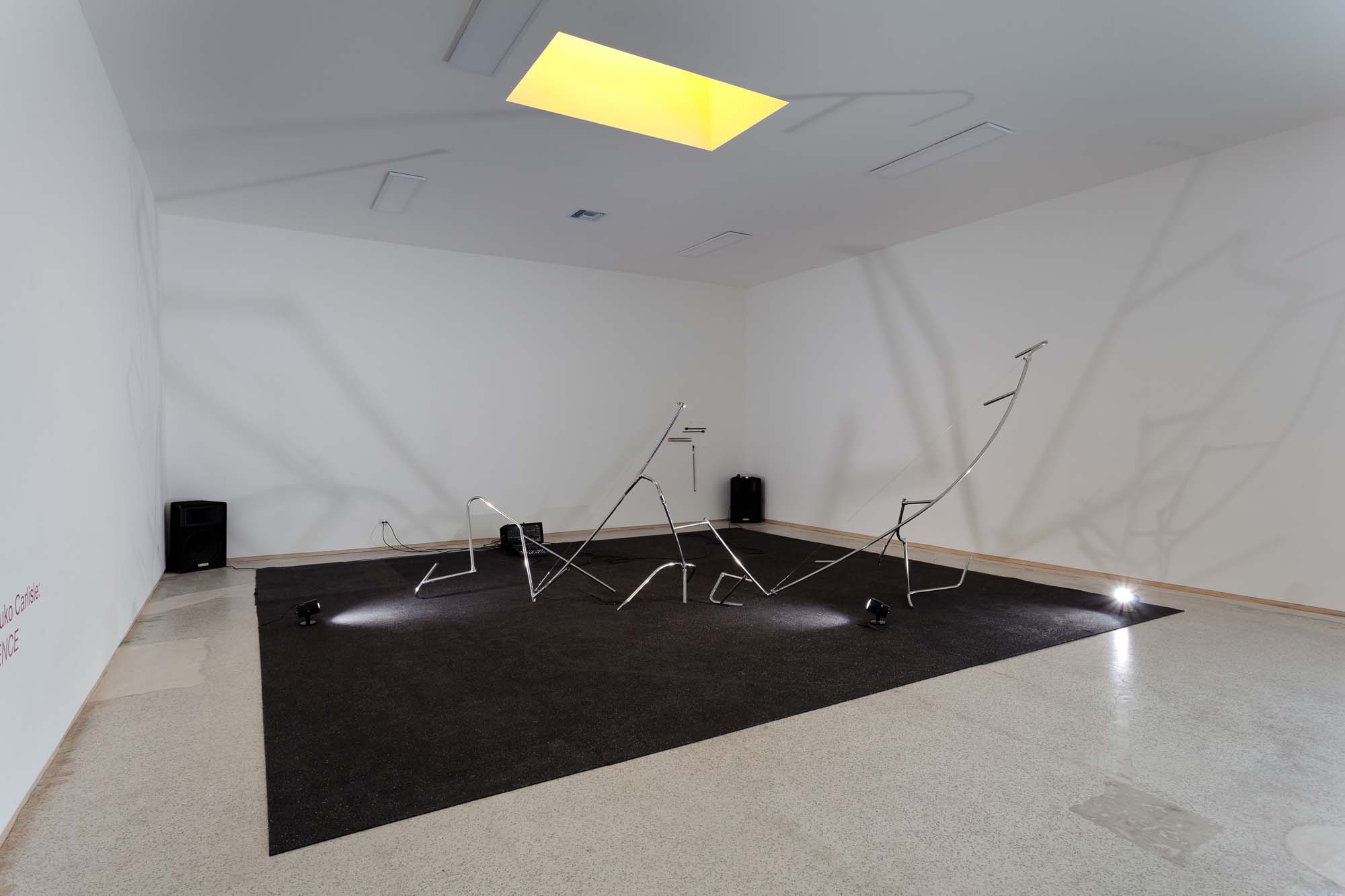 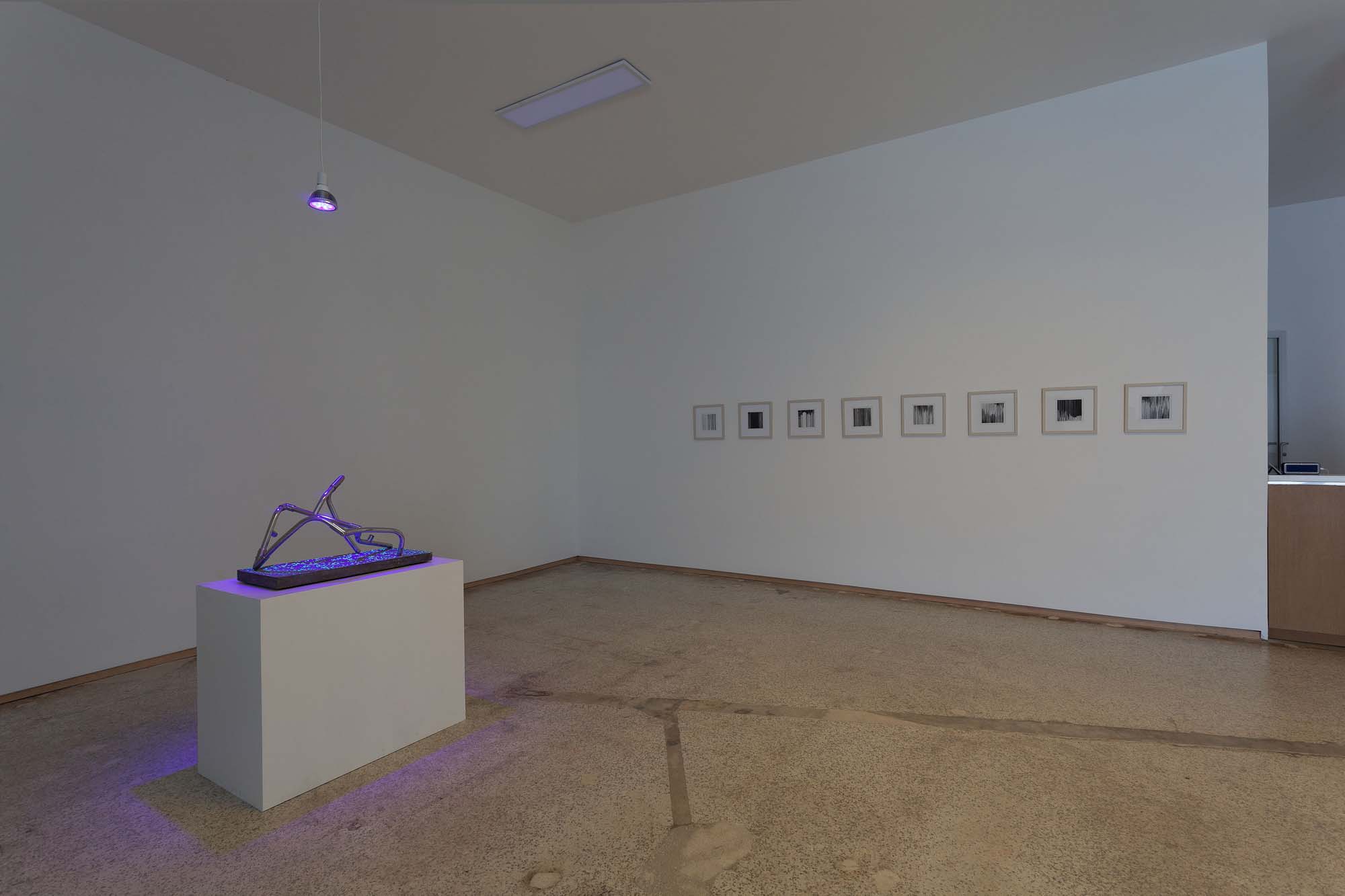 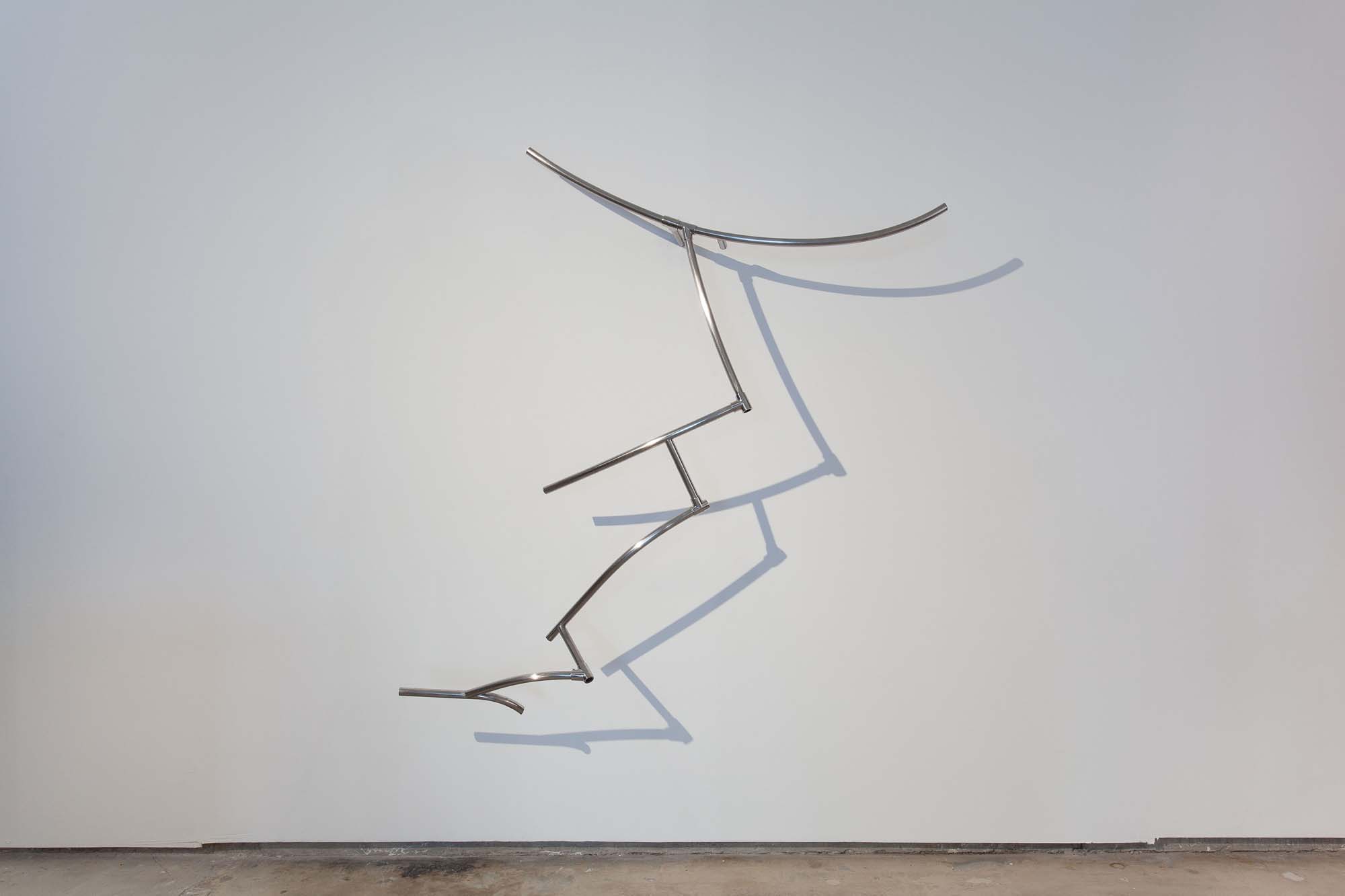 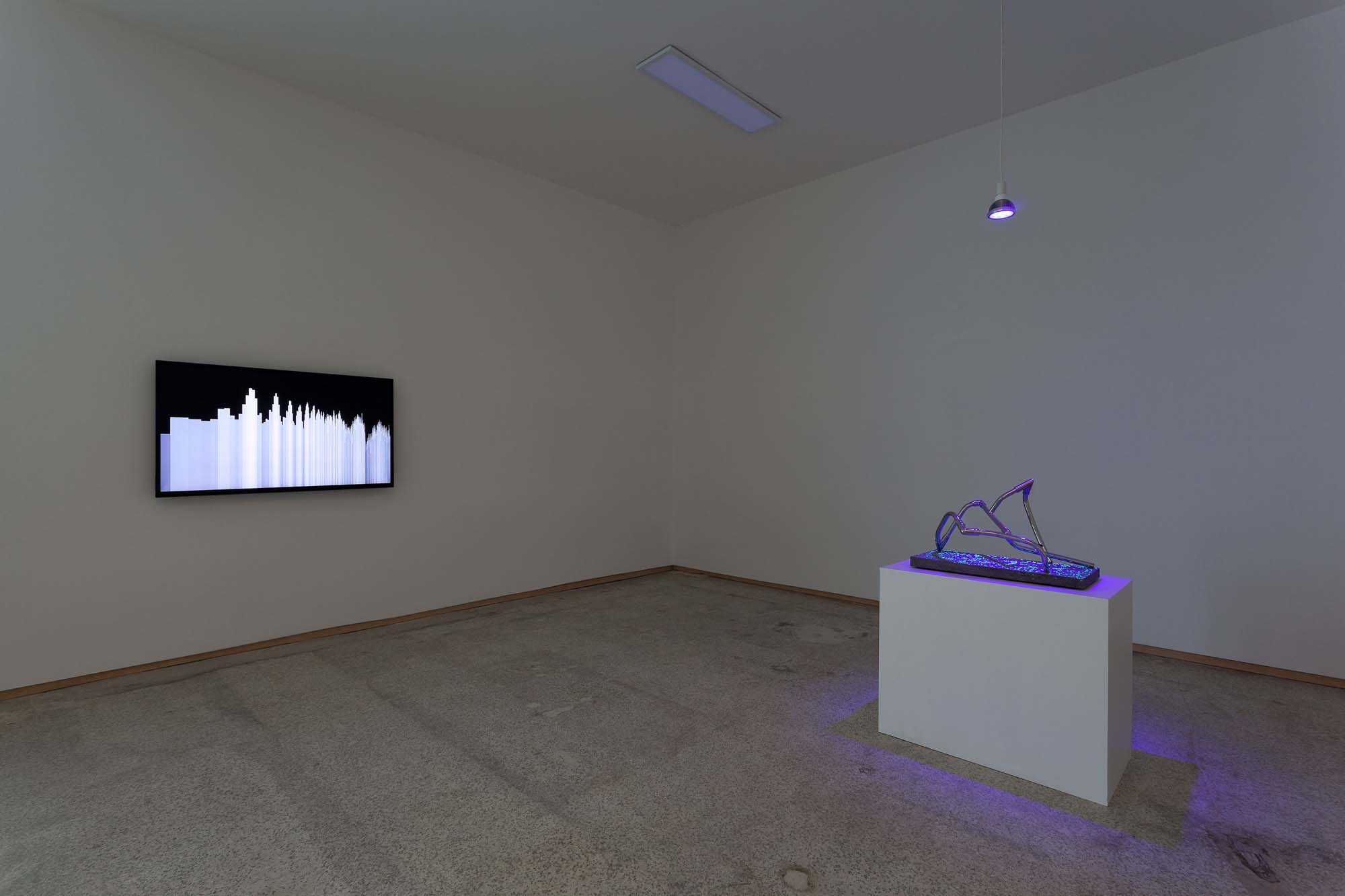 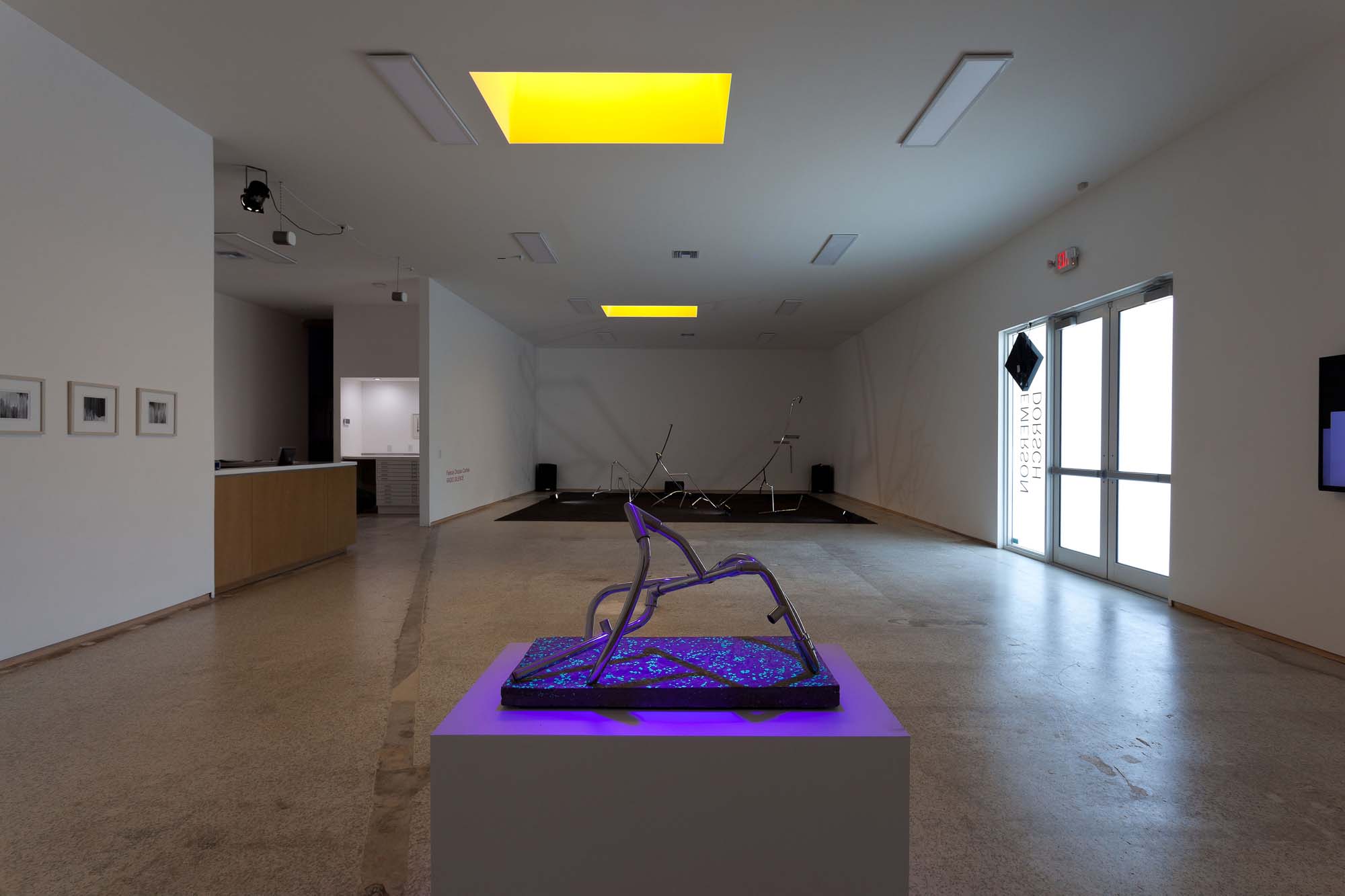 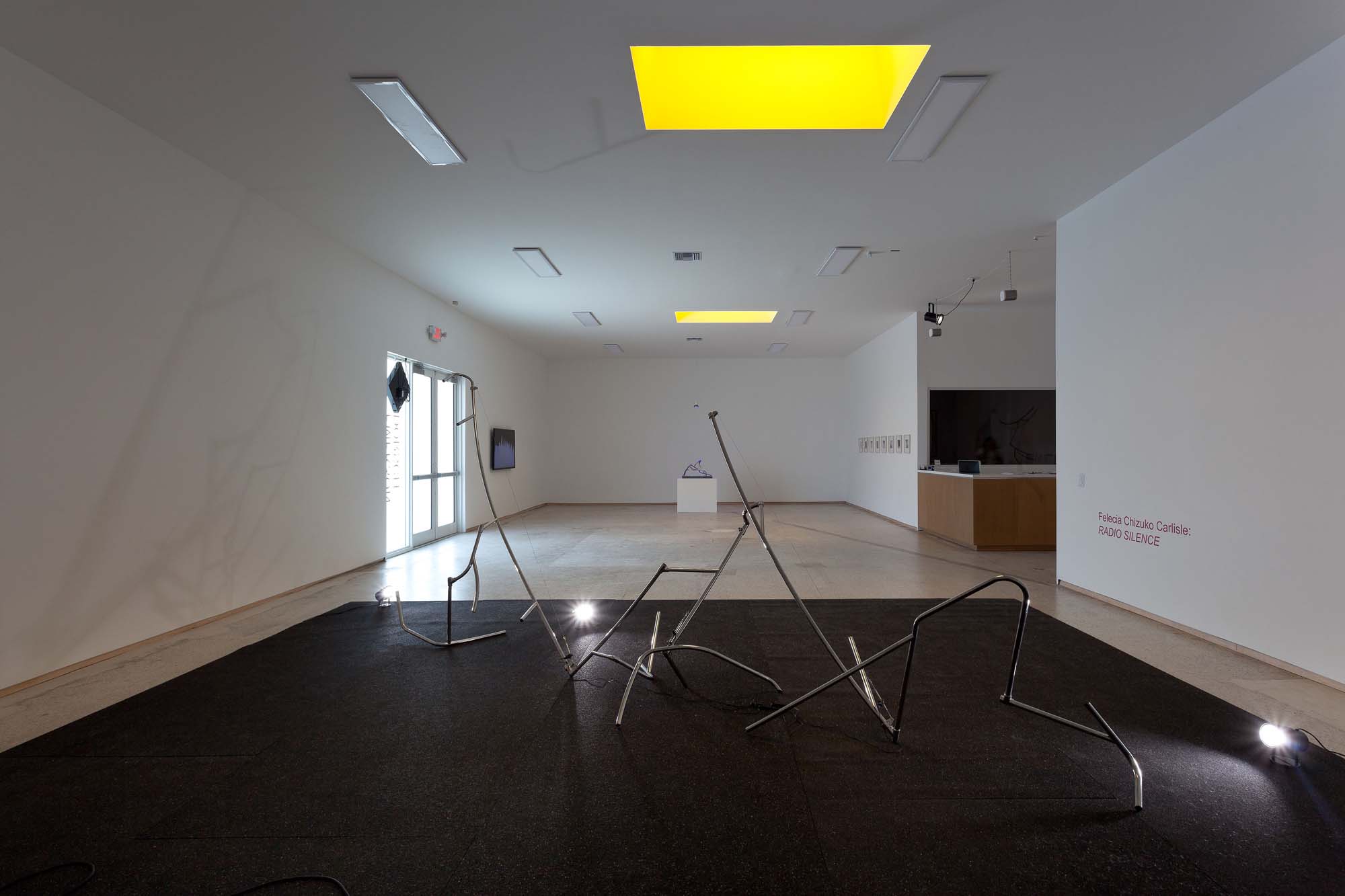 Emerson Dorsch is proud to announce that Felecia Chizuko Carlisle’s exhibition Radio Silence will open October 20, 2017, 6-9pm, with three performance sets at 6:40, 7:30 and 8:20pm. Carlisle wields her atmospheric alchemy once again to illuminate her bent metal sculptures, and visualized audio in the form of video and drawings on paper.

Bent and salvaged marine handrail sculptures are conspicuously silent, especially since Carlisle’s most recent sculptures were custom instruments made with piano wires. Only the largest sculpture in the grouping is playable and therefore vibrates with possible action. And action will happen: during three performance times on the opening night of Radio Silence, Carlisle’s friend and artist David Brieske will play the structure, called String Piece for A Sure Line.

This exhibition constitutes important shifts for Carlisle. The first is that she herself will not play the sculpture as she did in the past at Vizcaya Museum and Gardens in 2014 and ‘16, Locust Projects in 2015, and the Frost Museum of Art in 2017. The second is that the instruments are no longer attached to the wall. She “freed them from the architecture.” Finally their construction from components means that she can quickly create new iterations that will be fluid responses to any situation or site. She has devised a strategy for their mobilization. She says, “I like the sense of newness and rediscovery.”

She steps now into the role of conductor, thereby freeing the score and sculpture from her body. Her score frames silence, which is the noise in and around us. Involuntary noises are important. Ritual, signs and silence will be key components in the opening night’s events, used as parts of the frame.

Felecia Chizuko Carlisle grew up in the Panhandle of Florida, the youngest in a working class family of seven who went to church, loved and played music often and valued family above all else. Classically trained in the church on the piano, Carlisle eventually left for art school, earned a MFA from San Francisco Art Institute and “swore off old media.” She writes, “I was obsessed with the virtual and felt it was territory that needed to be defined and challenged and invoked—everything shiny and new, mysterious and exploratory. But more than a decade later I am thinking about how cluttered it is. The virtual is filled with trash; bloated bodies, endless and unnavigable territories. Floating space trash that pollutes every orifice.” She explains how she was able to access music again as an artist: “I went back to my roots […]If I wanted the same sense of community and spiritual relief that music gave me then I would have to make my practice do that. That’s why I made “Sound Brunch,” Whiskey and Noise nights, LOT, diddley bows… I was trying to recreate that sense of reverie and comfort that gospel music gave my mother and father without being a “musician”. I wanted to do that as an artist.”

Felecia Chizuko Carlisle, a native Floridian, has lived and worked in Miami, FL since 2009. She received her MFA from San Francisco Art Institute New Genres department in 2006. She is an artist, educator and organizer. She works across performance, installation, sound, sculpture, photography, and video within a wide variety of contexts including nightclubs, gardens, bathrooms, empty lots and fire stations; as well as, museums, commercial galleries and non-profit art spaces. Recent exhibitions include Frost Art Museum, USF Contemporary Art Museum (Tampa, FL), Locust Projects (Miami, FL) Vizcaya Museum and Gardens (Miami, FL) Riverside Art Center (Chicago, IL) and Fountainhead Residency (Miami, FL) and Emerson Dorsch. In 2015, she was awarded a Wavemaker Grant as part of Andy Warhol Foundation Regional Re-granting Program, Foundation for Contemporary Art Emergency Grant, and a commission from Miami-Dade County Art in Public Places. In 2016, she was awarded a scholarship and residency at Santa Fe Art Institute and co-produced LOT, an experimental gathering of artists, thinkers and leaders in an empty urban parcel in Miami. 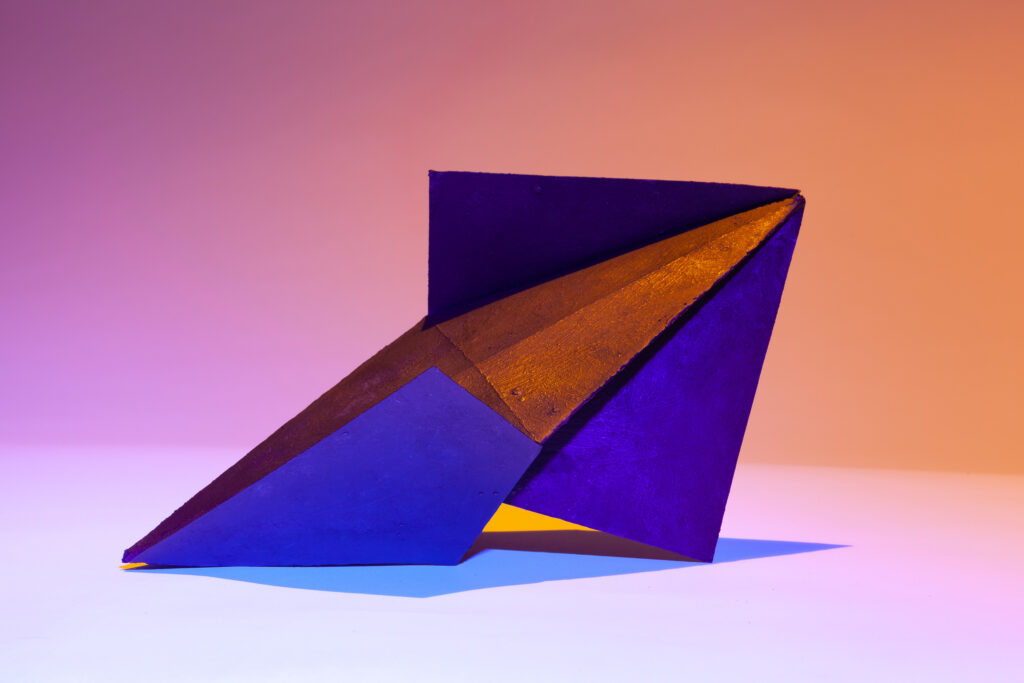 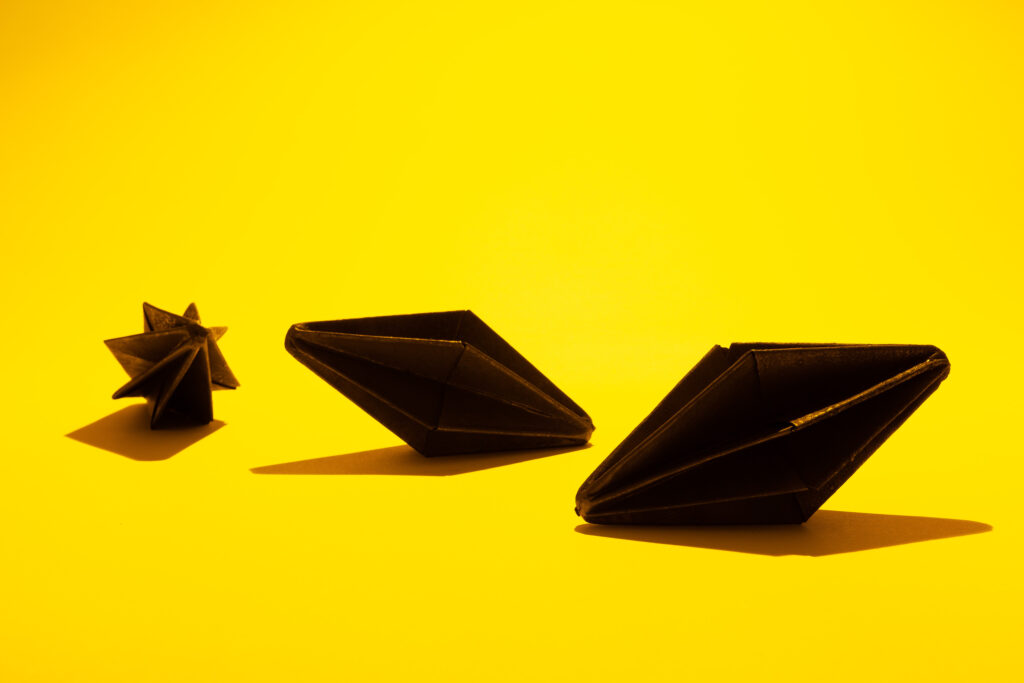 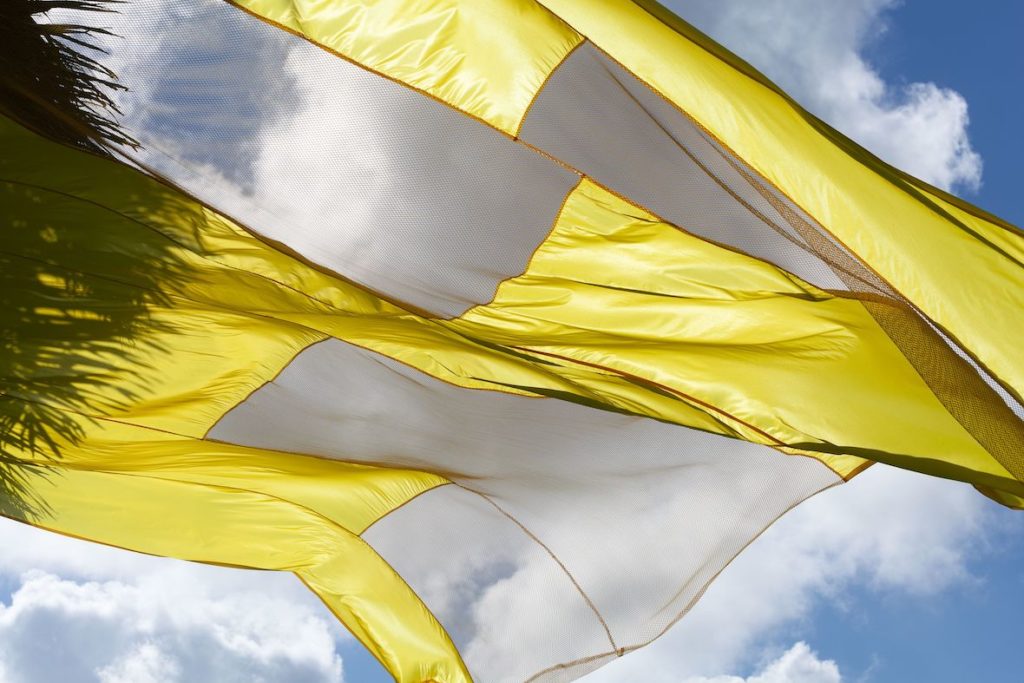