Mette Tommerup’s Made by Dusk featured in Artburst

Mette Tommerup’s large-scale installation at Miami’s Locust Projects isn’t meant to merely exist. Her installations evolve through the visitors who interact with them, the space they are in, and the process that was used to create them, from inception to completion.

“Made by Dusk,” on display through Jan. 23, is the last of a trilogy of installations that follow the pilgrimage of 40-by-12-foot canvases created in natural environments.

The canvases in “Made by Dusk,” perched on the gallery walls, show video projections of the Miami-based artist on the roof of the Locust Projects building throwing canvases off the sides and pulling canvases back up onto the roof.

“You are surrounded by videos of what it would be like to be on top of the building,” she says. “It is supposed to take you away.”

The projections – which videographer Pedro Wazzan shot from above at twilight, using a camera on a drone – document Tommerup’s process: how she “liberates” her canvases before they enter into a gallery space.

“For the first time, I was able to document pulling up all of the work onto the roof of the building and then, consequently, tossing the work down,” she says.

“Why would I want to toss the canvas? The idea was to expose the work to the natural element of the time of the show: dusk. Floating it through the air, and the canvas being exposed to the night sky.”

The canvases in “Made by Dusk” went through a process of applied acrylic paint in gold and grey. 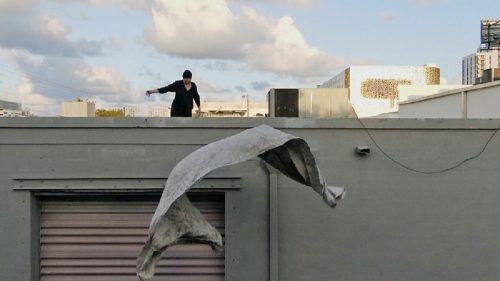 Mette Tommerup liberates one of the “Made by Dusk” canvases, as she tosses it off the side of the Locust Projects building at dusk. (Photo courtesy of Pedro Wazzan)

“Sometimes I use bundles of canvas and the canvases become the brush and I dip them in paint and then drag them, almost like dragging a body,” she says.

She puts the canvases through a number of paces in order to subject them to the elements. For “Dusk,” the canvases were put outside at twilight to soak in the timing, or she would do the handling of the canvases at that time.

This has been Tommerup’s process for all of the pieces in her three-year trilogy, which touches on the elements of water, fire and air.

The first installment, 2018’s “Ocean Loop,” showed at the Emerson Dorsch Gallery in Little Haiti. The artist strung small oil paintings of the sea and submerged them in the ocean. Some broke free and disappeared, and the ones she reeled in were discolored and tattered by saltwater.

“I’m interested in thinking of the paintings themselves as if they have their own agency,” she says. “They are independent of me, and they are breathing and alive – off on an adventure out of the blue.”

The following year’s “Love, Ur,” which also showed at Emerson Dorsch, focused on the Earth. Tommerup buried the canvases. She crushed them into the ground, immersing them to create whatever the environment would “paint” on the canvas. After they made their way into the exhibition space, visitors were encouraged to drape themselves in the canvases or roll around in them, if they pleased.

Tommerup says she admires the work of the late 1960s and early ’70s – obviously influenced by the Fluxus artists of that time, a group of avant-gardes whose art was meant to be social and participatory rather than something to be viewed.

“I’m really interested about ideas that were brought forth in that time period that have to do with the dematerialization of the art object – what happens when you strip away everything down to only the idea behind the object,” she says.

The stepping-off point for “Made by Dusk” is Locust Projects’ emphasis on strong female artists for its 2020-2021 exhibition season, in conjunction with 2020 marking the centennial of the 19th Amendment, giving women the right to vote. 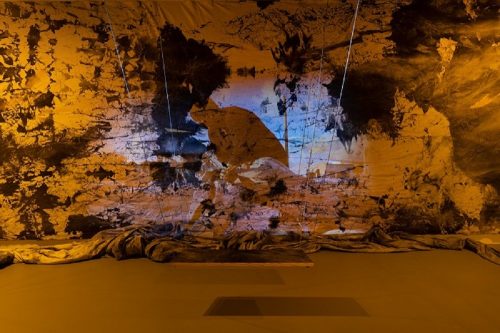 A video projection shows the artist working the canvas in “Made by Dusk.” (Photo courtesy of Zachary Balber)

“I am from a culture where women traditionally have been a lot more liberated and empowered than men in other places in the world, including the States for sure,” says Tommerup, who is originally from a small coastal town in Denmark. (She came to the United States to attend college in western Pennsylvania, then made her way to New York before settling in Miami in the 1990s.)

For “Made by Dusk,” she was inspired by Freya, the Nordic goddess of love, beauty and transformation who cried tears of gold. Tommerup wants the conversation that evolves from “Made by Dusk” and the influence of Freya to be “fueled by this otherworldly force, this divine entity. I needed something in the supernatural to work around for this project,” she confides.

“I wanted to bring in from another dimension a liberated, free-spirited entity.”

While the installation was in the works before the COVID-19 pandemic, its gilded and womblike atmosphere has added a place of refuge during a time of forced pause due to the coronavirus. “Made by Dusk” invites viewers to pause, but on their own terms.

The entrance to the exhibition is inspired by divine rays, a bit like a halo, ushering visitors into a space that at once is ancient but also post-modern. There are wooden benches suspended from the ceiling, and visitors are invited to sit and hover in time and space, bathed in golden light.

“With their feet slightly off the ground, the participant can locate an equilibrium that is empowering, disorienting and a place of contemplation,” Tommerup says. “The goal is to encourage a sense of liberation and restoration in this troubling time.”

These participatory elements of the exhibition are an essential part of the experience, she says.

During Miami Art Week, the first activation, “Liminal,” was viewed from Locust Projects’ parking lot. Starting at twilight, the performance included video projections of the massive canvases cascading down the side of the building. Blocks of dry ice were placed at the base, and attendees were encouraged to make a symbolic offering to Freya by dripping honey onto small jars.

“This created a hazy fog that captured the light and gave this cast of a warm, golden glow,” she says.

The intent went deeper than surface view: “While making the offering, they could contemplate their own wishes and desires.”

There are two more activations planned for January. The public can view the exhibit from 11 a.m. to 5 p.m. Wednesdays through Saturdays, by appointment or according to walk-in capacity. 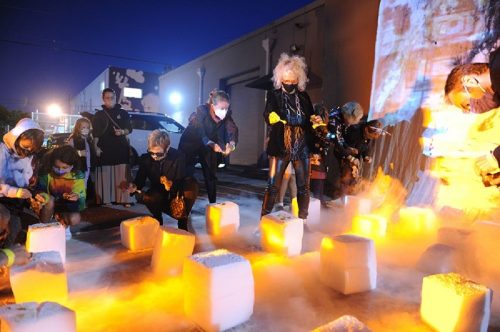 During Miami Art Week, “Luminal” invited participants to drip honey on dry ice during an activation of “Made by Dusk” at Locust Projects. (Photo courtesy of WorldRedEye)

For the Jan. 9 activation, “Ethereal,” visitors need an RSVP. Groups of 10  will be ushered, in 30-minute increments, into a space where delicate flakes of gold leaf float around. Visitors are encouraged to try to catch the weightless sheets to create a collaborative work of art.

“If it hadn’t been for coronavirus, we could have many people in,” she says.

With her creative wheels always turning, she is considering the possibility of having parts of the “Ethereal” experience spread outside to the street for passers-by. However, there’s “nothing set in stone yet,” she says.

Tommerup is putting the finishing touches on what she describes as a “horn of plenty,” which will contain and release the gold leaf in different fits and starts, “in unpredictable ways.”

As the day progresses, the gold will accumulate throughout the space, adding another element to the exhibition as visitors stir up the leaves, making them dance lightly in the air before falling again, according to the Locust Projects website.

“Ethereal” will activate the air in a mesmerizing way, she says. “It’s playful. Participants can grab the gold if they want. If we weren’t in the midst of coronavirus, I would want people to blow on the gold.”

Like the liberation of her canvases, activations such as “Ethereal” are designed to let visitors feel free.

“This offers an intuitive response to engage with the piece. There are no instructions,” she says. “I’ve seen first-hand that people will just dive in.”

As part of the constant evolution of the exhibition and of Tommerup’s wish to “surrender the work to another artist,” she wants people to regularly interact with the space, something that has become difficult because of the COVID-19 pandemic.

To that end, she has invited multimedia artist Danié Gómez-Ortigoza to present “To a ‘God.dess Unknown,’” from 7 to 8 p.m. Jan. 13. The performance piece, to be streamed, will explore “the process by which divinity unfolds itself from the universal to the individual in an otherworldly space and is dedicated to Freya,” according to a description by Gómez-Ortigoza. Instructions on how to join the event will be forthcoming on the Locust Projects website.