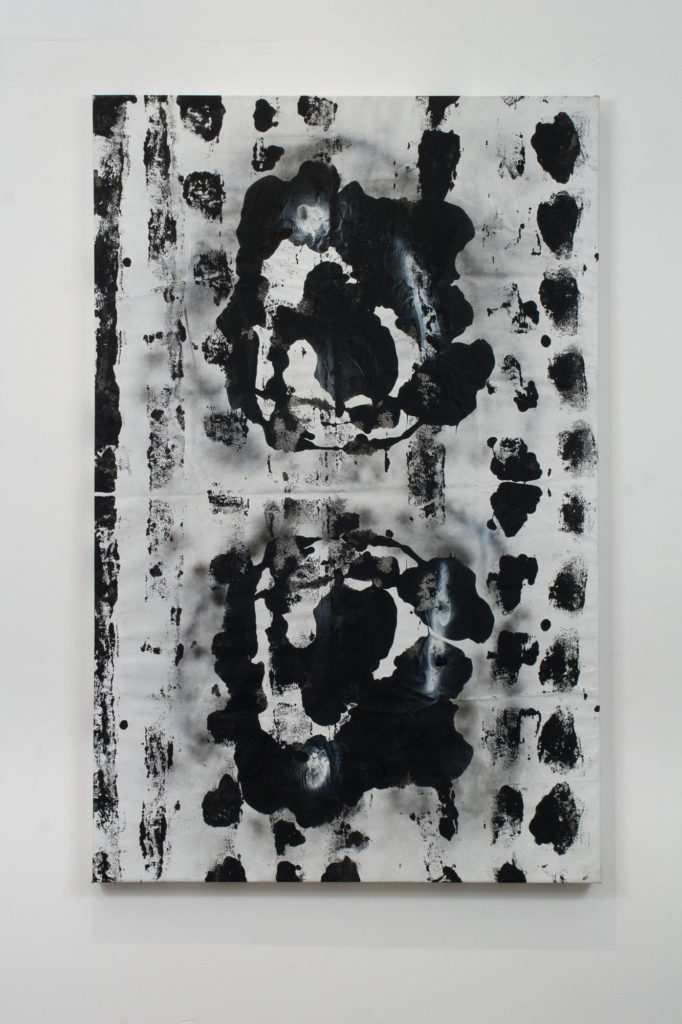 The tenor of Rigau's transgressions is a reminder of the mystical possibilities of another kind of knowledge, which springs from Afro-Caribbean spiritual practices. 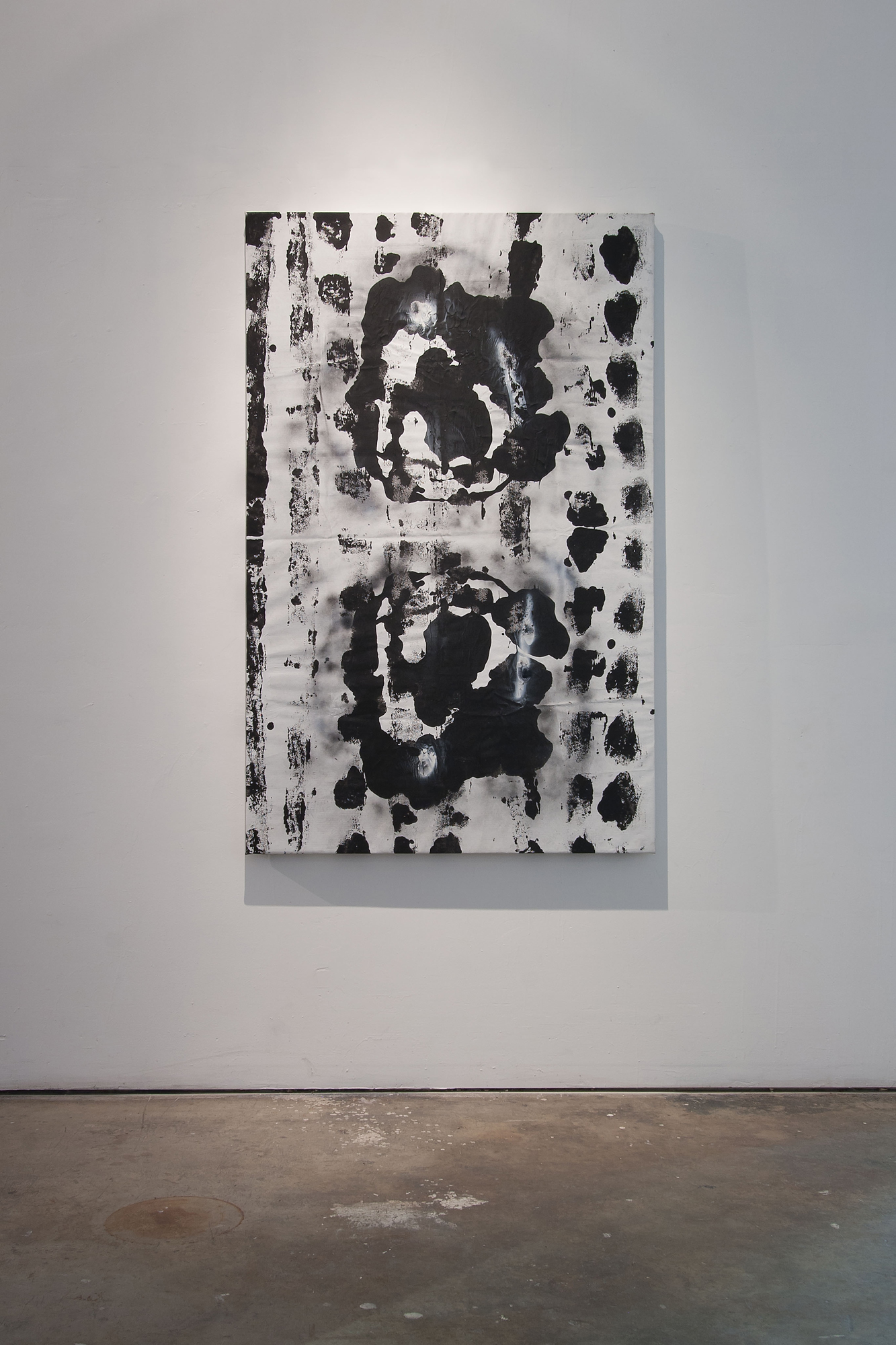 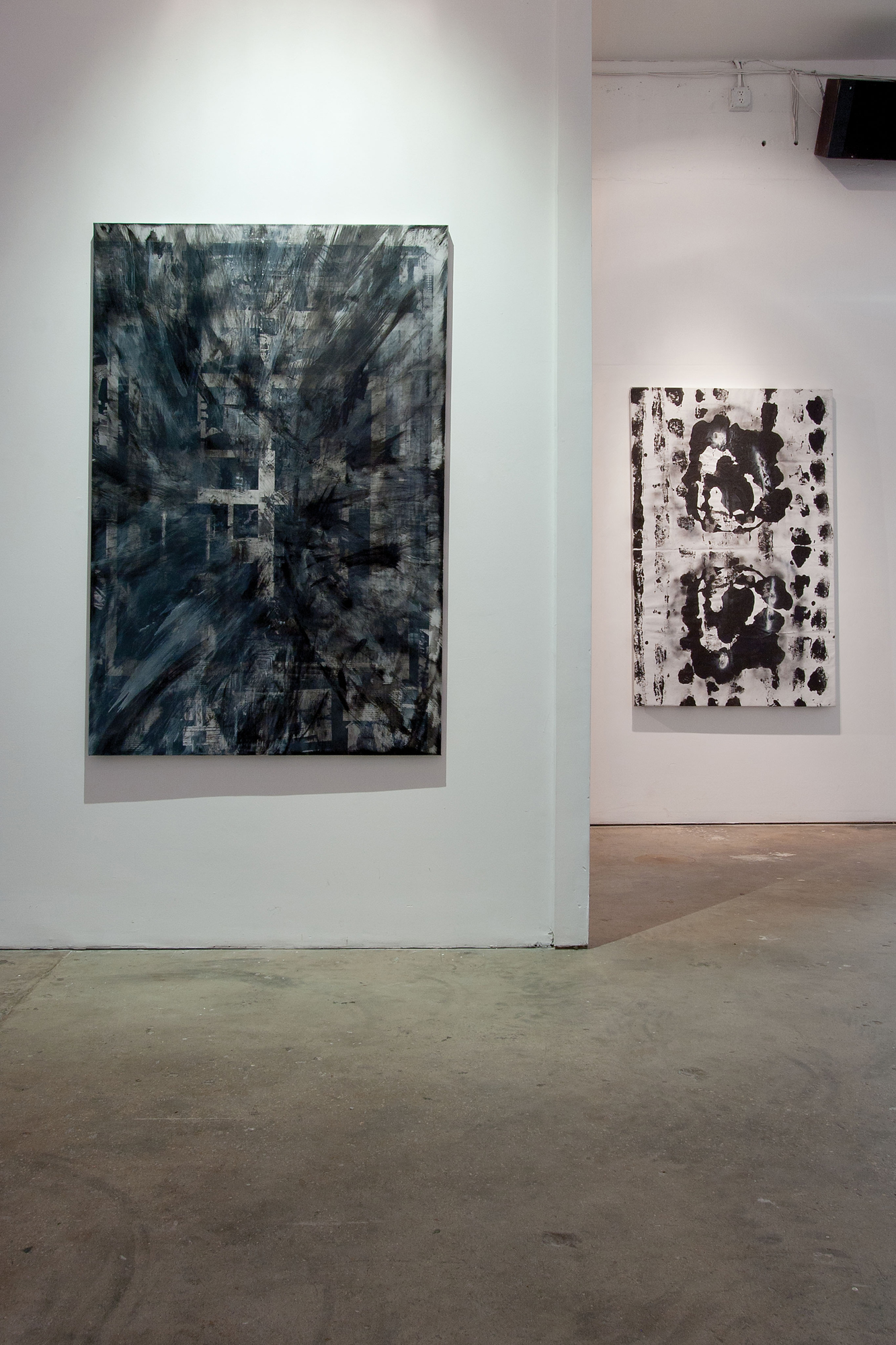 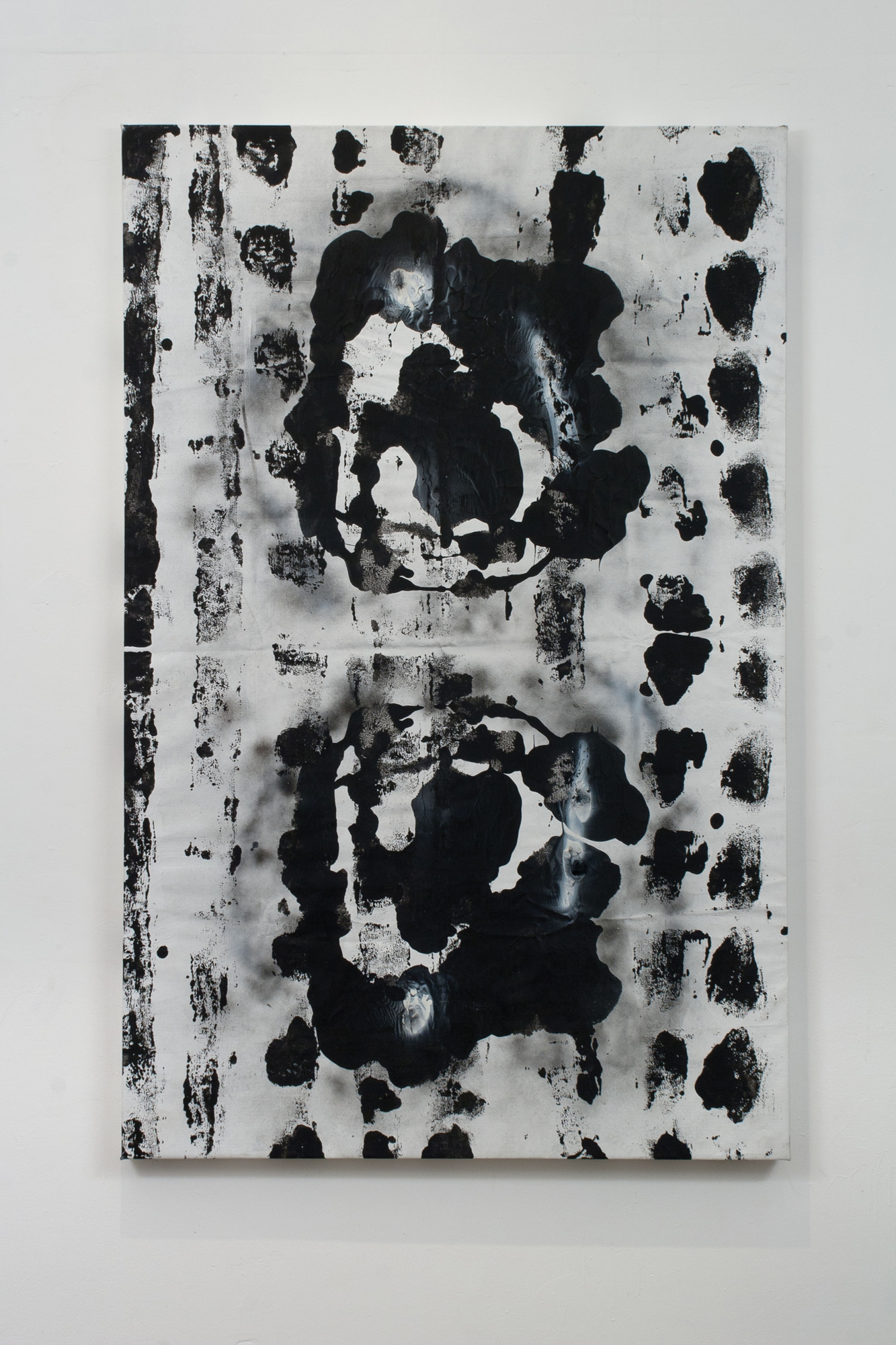 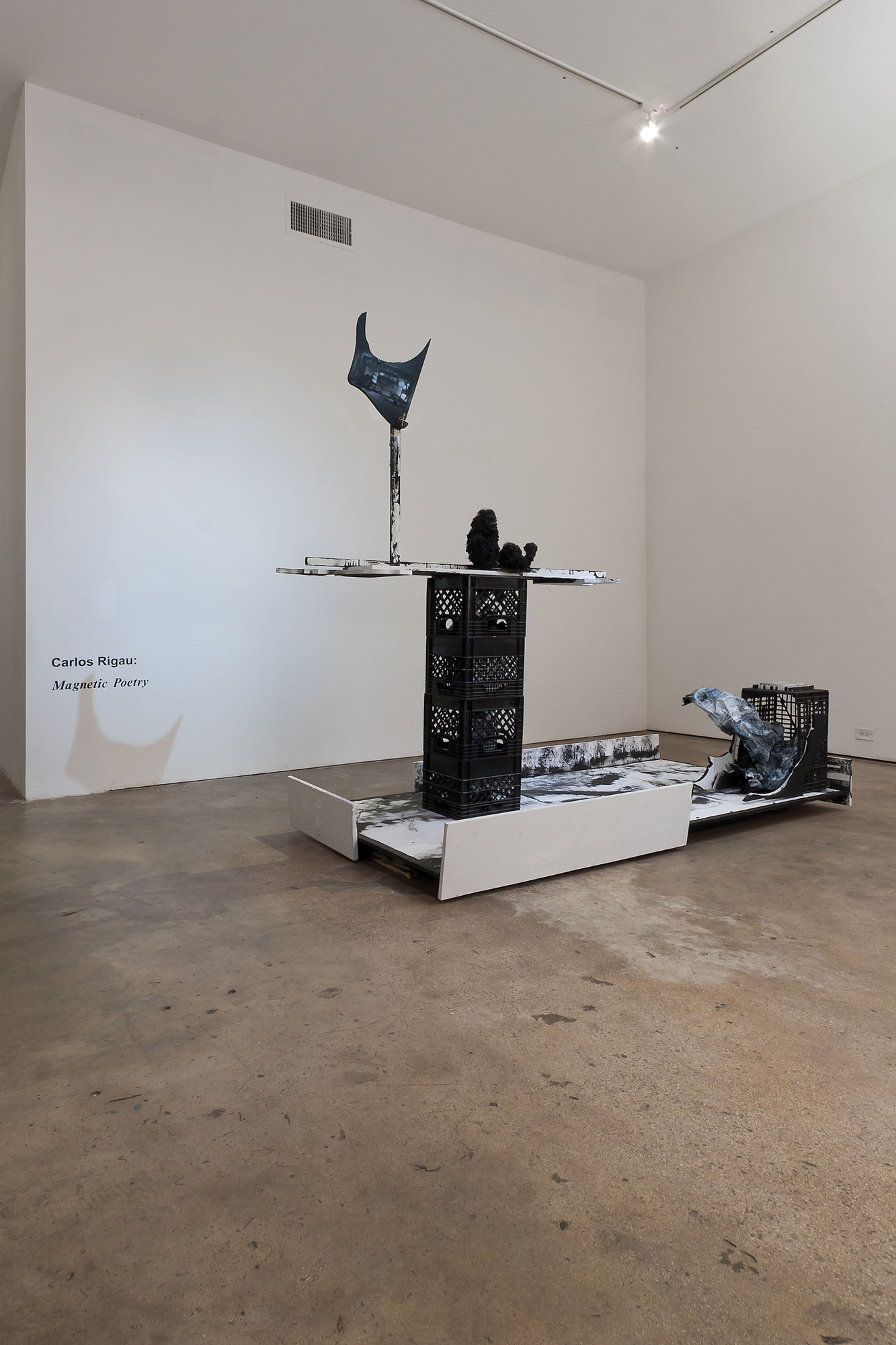 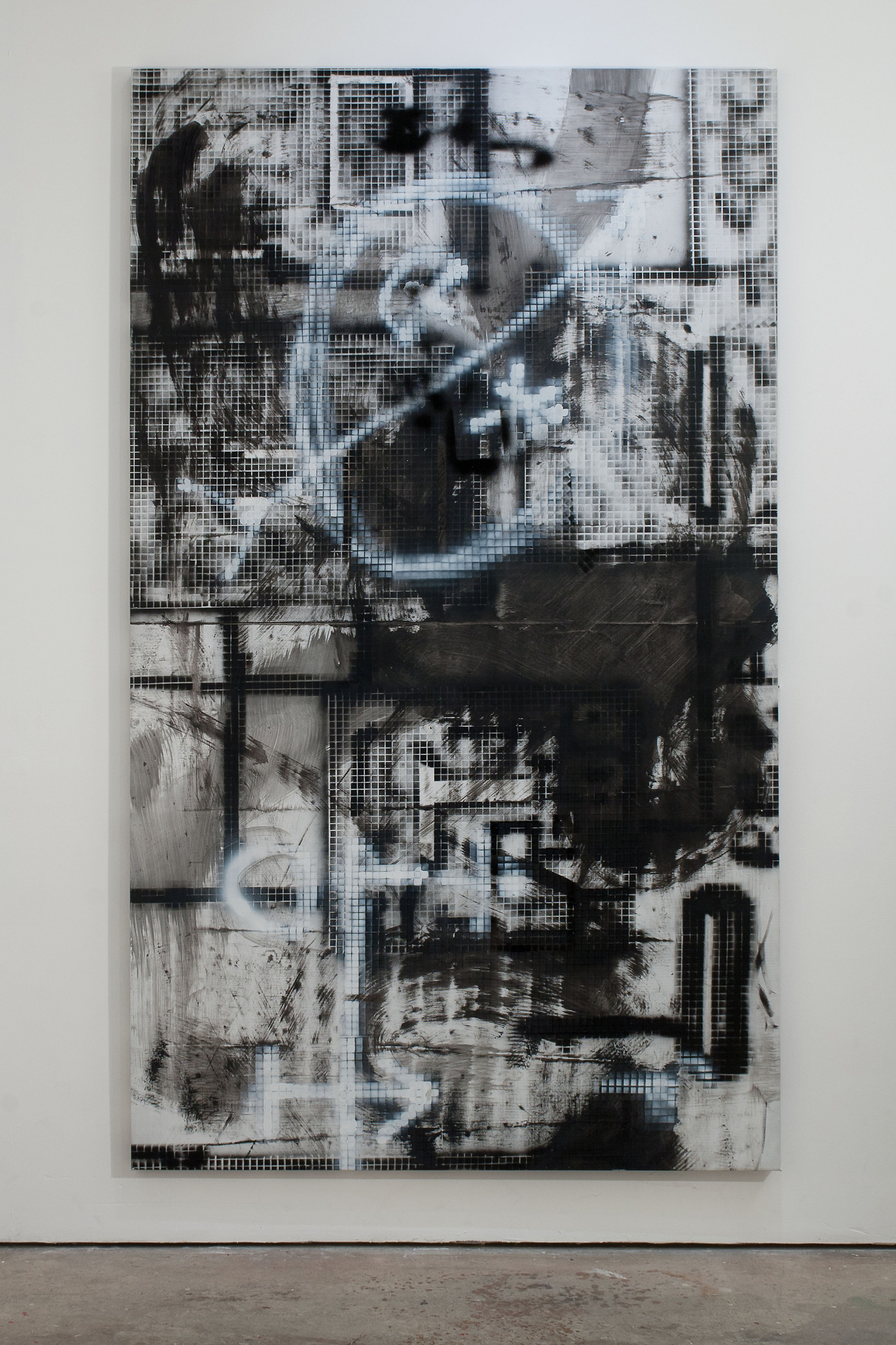 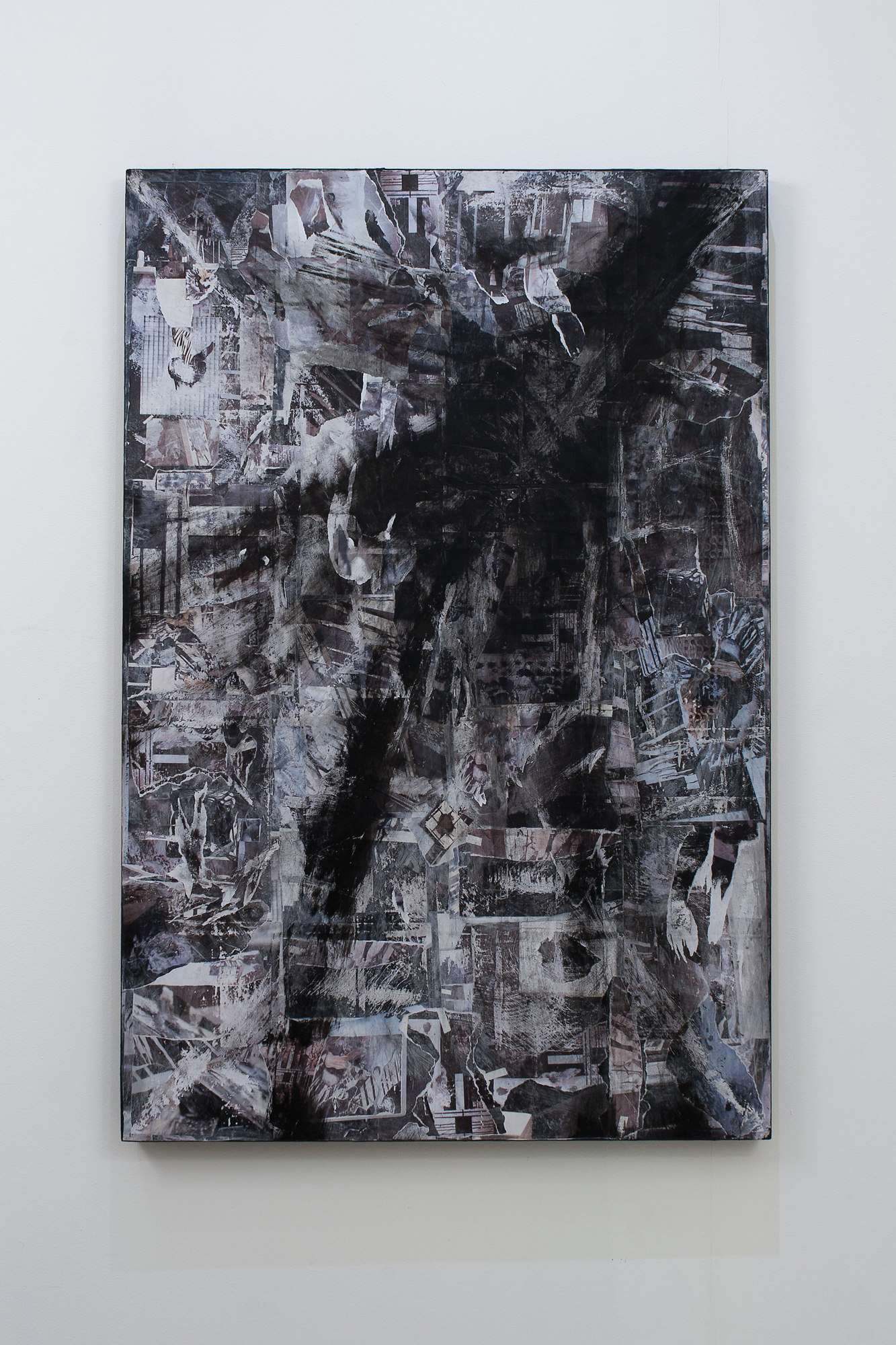 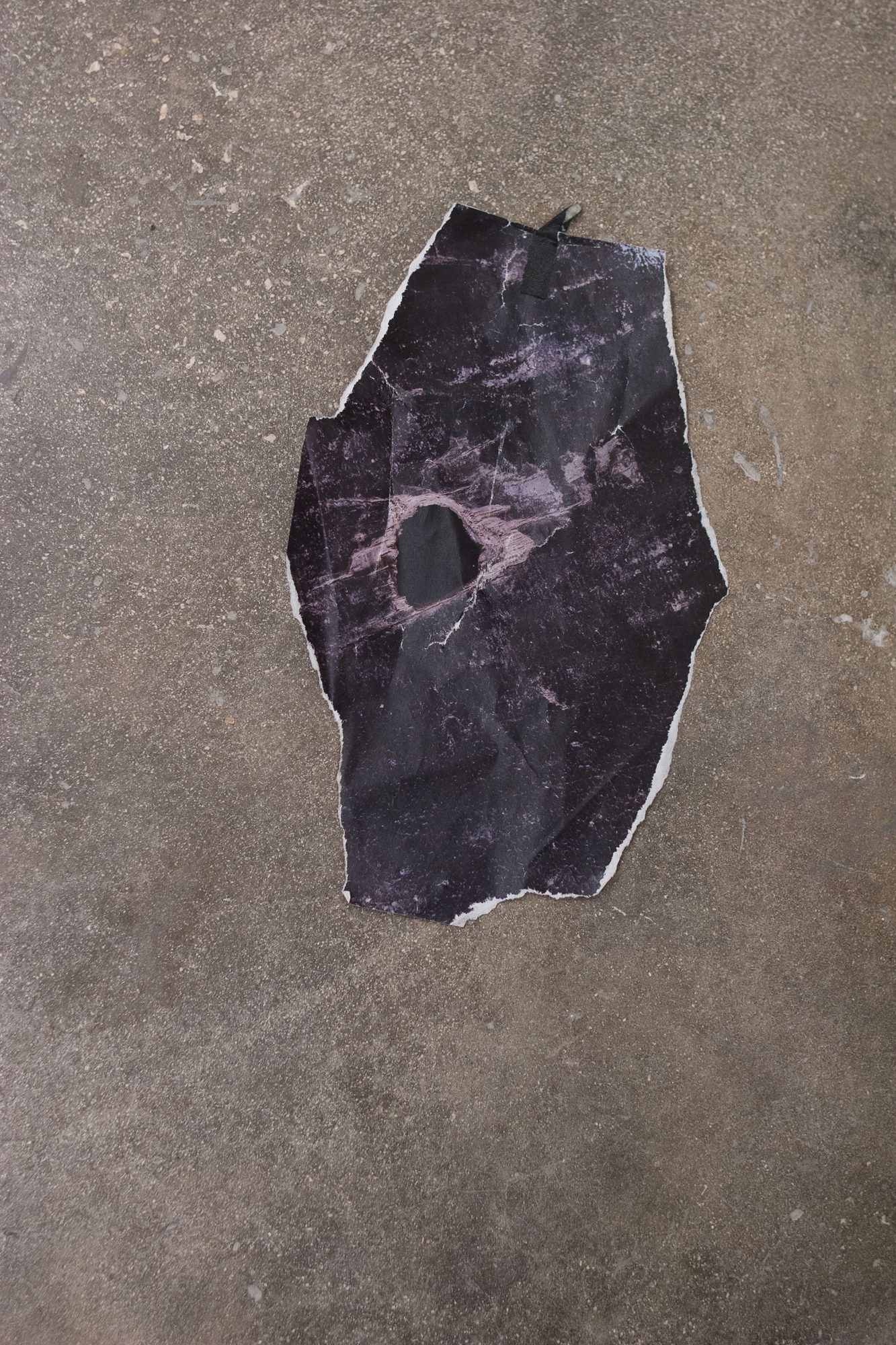 Miami, FL — Dorsch Gallery is pleased to present Carlos Rigau’s Magnetic Poetry. This exhibition of installation and sculptural works will be on view February 10 – March 31, 2012. With his work, Rigau seeks to challenge traditional categories of art: sculpture, video, painting. While this challenge is not new (vanguard art has been doing this for a long time), the tenor of his transgressions is a reminder of the mystical possibilities of another kind of knowledge, which springs from Afro-Caribbean spiritual practices. The underground nature of these practices makes them analogous to other subcultures, and in Rigau’s experience the most appropriate point of entry is the post-punk aesthetic. This exhibition’s core, a wall in his house and studio, is absent. Black and multi-textured, the wall mutates constantly, as Rigau photographs a section, applies the photograph to the wall, then paints over that, makes a sculpture of it, applies it to the wall, and so on. The wall is a self-referential feedback loop fed by the process of making. The three paintings, the sculpture and the video all refer to this wall. The first piece one sees upon entering the gallery, and Rigau’s exhibition, is his sculpture A Taste of Armageddon (2012). A tower of black plastic grid crates, containing pieces of more plastic grids, topped by a black crescent of roughly cut plywood, stands asymmetrically on sheets of white corrugated cardboard. Tacked-on pieces of wood suggest trim. Rigau quickly swiped black paint across the surface, using a Swiffer Sweeper. All of these materials and processes are derived from the living wall in his studio.

Citing Robert Morris’ historical work, A Box with the Sound of its own Making, Rigau is pre-occupied by ideas of process and how process can participate in the way an artwork is received. In its presentation, his sculpture affects an altar to its own process. The paintings in the next room are each discrete studies of Rigau’s wall. In one, Rigau printed an image of the wall on vinyl, then painted over it with a Swiffer in a centrifugal motion. In another piece, collaged torn pieces of black and white images of his wall, then applied three swipes of black paint with the Swiffer. In the third painting, Rigau used a plastic grid as a
stencil, spray painting black over white vinyl, then applied black paint with the Swiffer, and then spray painted symbols derived from Afro-Caribbean religions
above that.

These paintings flank the video Return to Tomorrow (2012), which re-presents his wall in a way that acknowledges the impossibility of ever knowing the whole. In high definition digital video, Rigau methodically recorded fragments of this wall-in-flux, then plotted them together in post-production editing. Each fragment was recorded at different times of day, so the light, airflow, shadows and color subtly shifts from one fragment to another. At times all fragments on the grid are on view, overtly separate from another because of the wide black lines between them. Other times, some fragments disappear. The play of these fragments on the grid highlights how, one can never see a thing in its entirety; one must piece together different perceptions of the thing – or the idea – in one’s mind. This piece is perfectly about how, even if the wall that is the center of this show were in the show, it could never be completely knowable. In effect, by its absence, the wall can continue to be in flux and can also continue to be a vehicle to the other side of knowledge.

The shades of black and shadow in Rigau’s wall and his methods of crossing over to it in its absence should recall shamanistic practices. The play of shadows on the wall of his projected video also recall Plato’s Parable of the Cave, from The Republic. In it Socrates describes men chained in a cave so that they cannot move their heads or bodies. With a fire burning behind them, they can only look forward, looking at the shadows on the cave wall in front of them, believing that these shadows are the truth. Not until a man escapes from the cave does he “see the light,” experience temporary blindness and then grow see the world as it is – to see truth
and with rationality. This man now understands the shadows for what they are – as shadows. But, since this parable is about the education of a legislator of the Republic, this man has more to learn. Rigau’s fragments are like the prisoner’s forcibly limited world-views. With this exhibition, Rigau is defining the negative
space around his wall, which can be seen as an analogue for art-making and art itself.

Carlos Rigau was born in 1978 and raised in Little Havana, Miami, Florida. He received his MFA from Hunter College in New York. His work has been exhibited at LMAKprojects and Jack Tilton Gallery in New York; Shane Campbell Gallery in Chicago; and Nice and Fit in Berlin, Germany. In Miami he has exhibited at Miami Art Museum, MoCA North Miami, Dorsch Gallery, Dimensions Variable, Art and Cultural Center of Hollywood, and Art Center South Florida. His has developed project rooms for such institutes as Locust Projects and de la Cruz Collection in Miami, the later titled ‘Fighting Kissing Dancing’ was also exhibited at the Fabric Workshop and Museum in Philadelphia. Rigau is the founder of General Practice, an artist-run space that organizes projects in Miami and New York. 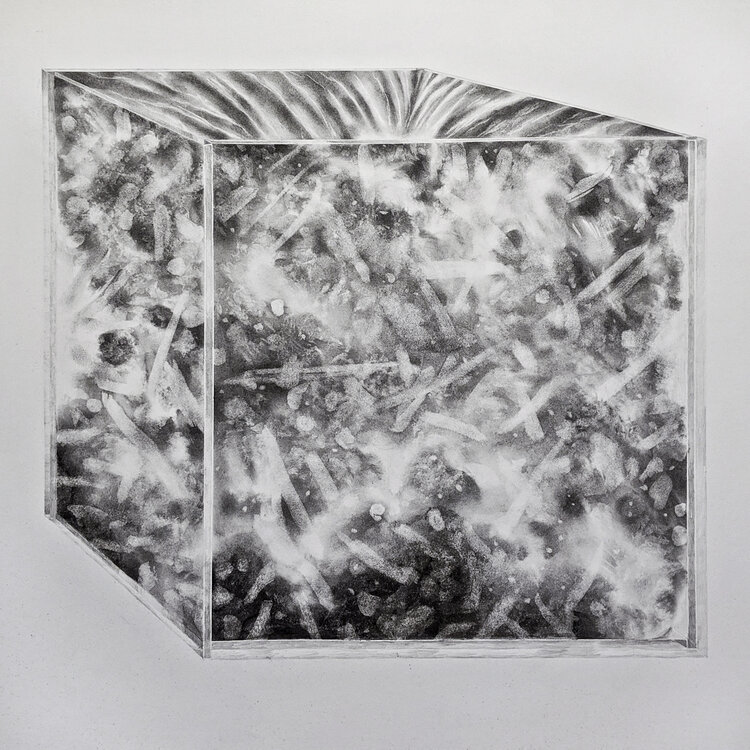