An essay about Elisabeth Condon by Jason Stopa

This essay by Jason Stopa about Elisabeth Condon was originally published with the title "Domestic Aesthetics" in the exhibition catalog for "Elisabeth Condon: Effulgence" at Emerson Dorsch

Some painting of the last decade presents itself as politically neutral, simply about aesthetic taste, and lacks any stakes. Others still are incredibly didactic, demanding the viewer agree with their sentiment as much as their surfaces. Somewhere in the nexus of this is a painting that acts as a container for near-religious feeling in a world of the secular. Combing over Elisabeth Condon’s work is a bit like reading her diary: strangely disorienting at first, then disarming and familiar. In her writing she reflects on the nature of possibility, the first person you see upon awakening, the everyday environment in Florida, the use of gesture versus wallpaper. The list goes on. One particular passage stood out to me: the studio is a cathedral. This is perhaps the most accurate way of entering the nature of her practice. She finds her language within the visionary leanings of Charles Burchfield, the graphic sensibility in the Pattern & Decoration movement of the late 70s, and transcendent contemporaries like Victoria Roth. Condon is a painter whose work prompts questions.

Condon’s paintings are most successful when figure/ground relationships are pronounced. In a painting like Green Lattice, (2019) she uses a green lattice pattern that acts as a wallpaper pattern and ground. Painted in a flat, sap green and bordered by linear, black lines, the foreground has a pop quality to it, it reads in a graphic manner. This sets the stage for the action of the painting. The center is composed of yellow-greens, cadmium yellows and deep blacks and vaguely resembles a flowering leaf. Using stains and painterly daubing, it is an activated, sensual area that stands in direct contrast to the formal geometry of the lattice work. I am reminded of Lee Krasner’s late paintings that evoke the anatomy of flowers creating cut-out-like space. The effect is somewhat overly literal, a sense of an artist trying to get their bearings, as geometry and incidental mark-making contrast with one another.

In this new series, Condon often prods the viewer with the familiar. A flower or tablecloth can be obvious symbols for domesticity and femininity; if the viewer takes the bait the symbol is used as a vehicle for image making itself. Pink Lattice, (2019) reveals a brazenness unseen in the former lattice painting. Condon uses a pale pink lattice as an armature for this work. Drippy, cobalt blue lines spider-web around the center of the painting. Sap green, cobalt blue and cadmium orange stains, spills and smudges punctuate the overlapping interstices of the work. Three illustratively rendered, white hollyhocks are placed near the bottom left of the painting. Each successive layer delineates itself from the former, creating a spatial depth against the lattice framework. The three delicate flower buds, so tightly drawn, create a discursive pictorial space against the physicality of her mark-making.

The disorientating subject/object relationships at work here bear a relationship to visionary painting. Condon’s paintings tread lightly over this now widely celebrated, but once peripheral part of modernism: the romantic, visionary impulse. If we reach back into modernist history, we’ll find Condon’s affinity for rich color, bold lines and near ecstatic reverence towards the natural world often found in the paintings of Charles Burchfield and Georgia O’Keefe.

In Sidewalk, (2019) the artist achieves a greater formal complexity with acute attention to surface/image qualities. Condon seems in full grasp of her capabilities here as idiosyncratic decision making is foregrounded. In the bottom half of the painting, a pale, green honeycomb silhouette peeks through pooled-stained, yellow valleys above. Teal and emerald green leaves dot the center and edges of the painting. Near the top of the canvas and the bottom right the artist has painted white, billowing, cartoon cloud formations, each feels a bit superimposed and borrow from the language of other Pop formalists like Ken Price. No singular formal element dominates the picture plane, lending the painting a more decorative reading. It reveals an artist with a range of painterly tools at her disposal, knowingly discerning when each is ready to play its role. For Condon, the image is a starting point, and her best paintings deviate from literalness with surprising result. The impulse toward the decorative is nothing new, however.

Before Post-Modern discourse erupted on the 1980s scene, and after the heyday of macho Minimalism, a challenge to high modernism came in the form Pattern & Decoration. The loosely defined group of mostly women were concerned with the often used pejorative “decorative.” Artists like Valerie Jaudon, Joyce Kozloff and Miriam Schapiro relied on ornamentation finding inspiration in variety of fabrics, folk art, Islamic architecture, French modernism, ceramics, Celtic manuscripts and even theatre sets. The work was largely abstract, though some representational elements remained. There was a kind of hedonism at work in an effort to combat what was seen as severe austerity in service of purity and truth to materials. It is no wonder that Condon’s work bears a relationship here, where domestic pattern, flowers, and gestural mark making come together in service of pure pleasure.

A flower or tablecloth can be obvious symbols for domesticity and femininity; if the viewer takes the bait the symbol is used as a vehicle for image making itself.

In his 2008 review of Pattern and Decoration: An Ideal Vision in American Art, 1975-1985, at the Hudson River Museum, New York Times critic Holland Cotter explains the sentiment of the time: “Art associated with feminism has always had a hostile press. And there was the beauty thing. In the neo-Expressionist, neo-Conceptualist late 1980s, no one knew what to make of hearts, Turkish flowers, wallpaper and arabesques.”

Painting flowers today can be tricky business. Condon isn’t naïve about this. It would be a misattribution to assign loaded terms like beauty, with all of its philosophical baggage, to this body of work. In the 90s, the art world favored installation, photography and institutional critique; it was a period when painting was out of heavy circulation. Yet, painting persisted. Flowers appeared now and again, the more notable examples consisting of the ironic, doily-stenciled flowers in early Christopher Wool paintings along with the saccharine sweet, cliché-ridden flowers of Karen Kilimnik. Most recently, Julian Schnabel’s show at Pace Gallery in 2017 were ruminations on the roses and shrubbery near Van Gogh’s grave. Unfortunately, the artist’s biopic film on Van Gogh delivers greater poignancy and verve than his theatrical, faux-romantic paintings in Chelsea. None of these artists’ approach to flowers appear analogous to Condon’s. Rather, she joins contemporaries like Victoria Roth, whose work firstly disarms and then delivers a social punch. Roth often paints nerves, scrims, and ropes intertwined with abstracted bodies and vegetation. The corporeal body and dying flora and fauna are implicated in an environment that illuminates the artists’ social relationship to the world. This drama plays out in the layered spaces of Condon’s paintings. Condon is equally interested in the social space of painting, using domestic motifs as a marker of identity. Both artists assert an aesthetic that disrupts the codified, media spectacle of conservative culture.

Forty years since Pattern & Decoration, it would appear we are entering the same culture wars originally initiated by Reagan and Thatcher. To make subtle paintings in today’s America is to carve out space for unregulated self-discovery, calling us back to a sense of humanity in inhumane times. Condon isn’t interested in grand, declarative statements. These are painterly, nuanced works of surface invention. Yet, these are also deceptively political paintings. The decorative here in Condon’s painting serves as a formal device and a marker of “feminine” identity asserting itself against a culture of reactionary values. Here, flowers, wallpaper and lattice act as feminist iconography. The aesthetic pleasure we receive from these works bears a social component, thus the social is embedded in the formal, it always is. 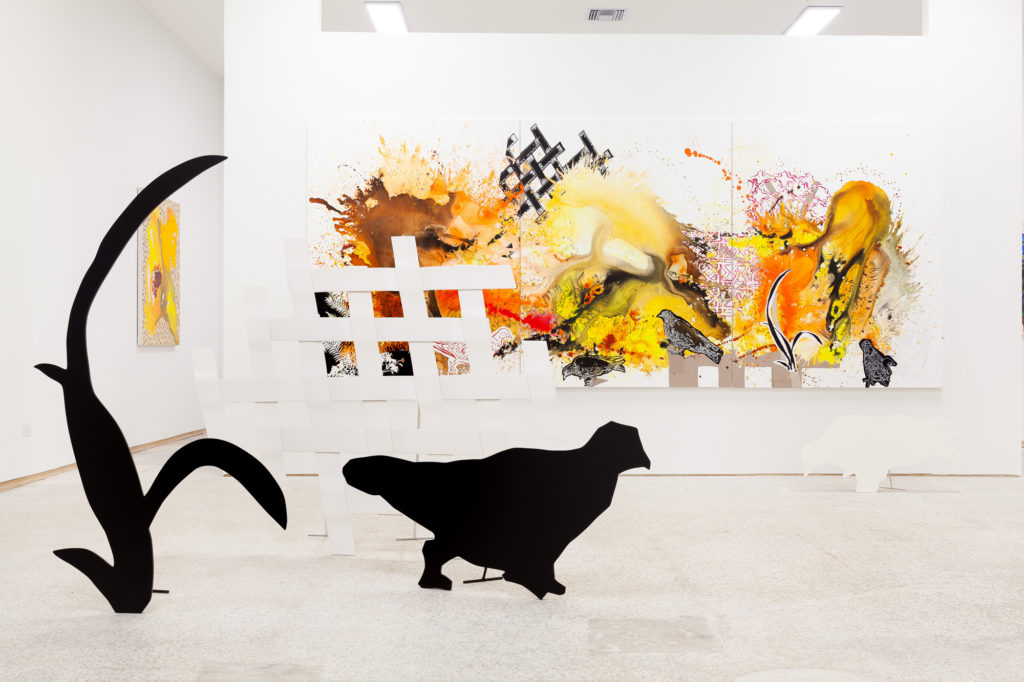