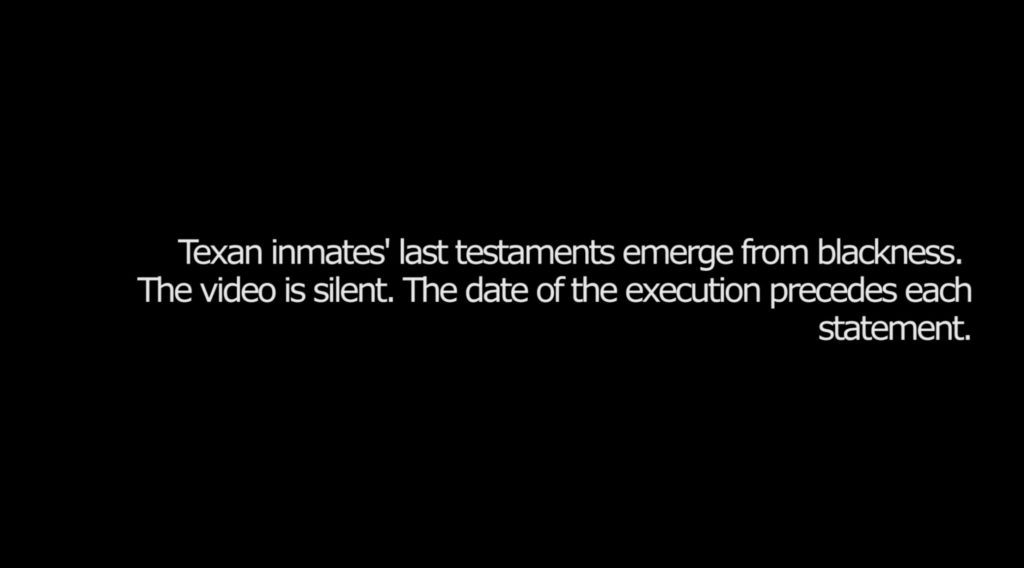 Powell explores history, mortality, and language's relationship to memory, both personal and collective.

Freya Powell explores history, mortality, and language’s relationship to memory, both personal and collective. Emerson Dorsch presents Powell’s moving video i’ll smile and i’m not sad (2012) in the Project Room. Writ in spare, white text, Texan inmates’ last testaments emerge from blackness. The video is silent. The date of the execution precedes each statement. To experience the methodical appearance and disappearance of the 475 dates and statements for the hour that follows is to consider the values of life and the way death punctuates time’s passing.

Freya Powell was born in London, England and is currently based in New York City. Powell’s work has been exhibited across the U.S. and internationally. In 2011 she was awarded the William Graf Travel Grant, to make audio recordings of the coastal military Sound Mirrors in England, and she is currently in residence at the Bronx Museum through the Artist in the Marketplace program. Her practice incorporates video, photography, artist books and printmaking. She is interested in the imaginative space, making truth felt rather than just telling it. Working with a minimalist aesthetic and the use of abstraction her work moves beyond documentary status, slowing perception and engaging common experiences. She received a B.A. from Bard College in 2006, and a M.F.A. from Hunter College in 2012.